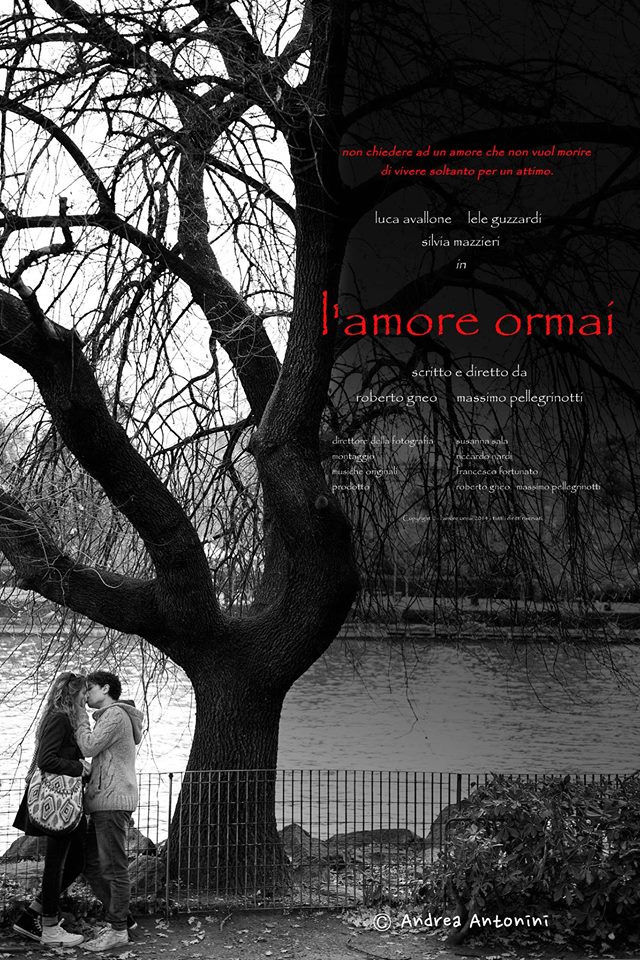 TITLE: L ‘ amore ormai (The Remains of Love) – Do not ask a love who does not die, he lives only for a moment

A girl receives a phone call from the ex boyfriend, who she has not seen for two years and asks to see her again. After the meeting, he convinces her to go to his house, where he tries to win her back. After he received a refusal, the boy suffers a disquieting transformation and becomes a kind of werewolf…

The 43 years old Roman, Roberto Gneo, graduated at 20 years old from the State Institute for Cinema and Television of Rome “Roberto Rossellini” qualifying professionally as a cartoonist. In the same year, he furthers his professional training at the Studio Cartoons in Rome “Di Gi International” of Paolo di Girolamo, learning the tasks of Screenplay, Camera Operator and Film editing. In 1992, he got a masters degree in Entertainment (History of Cinema), at the “La Sapienza” University of Rome, and he later enrolled in DAMS at Roma Tre University. At the same time, he attended professional ENFAP courses and qualified primarily as film and television Camera operator and later as RVM Editor. Since 2012, Massimo Pellegrinotti, friend and companion of studies and professional training, decided to give life to an artistic association with the aim of creating and autoproducing, their entire film project. “L’ amore ormai” is their debut.

The 45 year old, also Roman, Massimo Pellegrinotti has a similar career path as a cartoonist, illustrator, and graphic designer. He has conducted cinematographic studies and trainings, and he always had love and passion for the arts and literature.

“L’ Amore ormai” is an ambitious and successful film- surreal, with a touch of gothic, lycanthropy and horror, but with an existential subtext. It demonstrates significant thoughts about bad (and contagious) love that characterizes our society. The stylish black and white picture (with only the flashbacks in color) represents the protagonist’s bipolarity and the dichotomy between deleterious and healthy love. With long and meticulous preparation, this style also helped with saving costs, especially with the sets, since the film was made with less than 2,000 euros and just four days of filming. The style of the film is very personal, being outside the conventional pattern of the video clips and the frenzied assembly- a style that re-evaluates the attention to the construction of the image. Another detail are the ticking and the silences that emphasize the dramatization. Directors renounce music to help the pictures when it is only in the last 10 seconds and in the closing credits. And so they force the viewer to pay more attention to the image. The camera is always on the characters. The film ultimately works well. Good!

STATEMENTS FROM FILM: “Do you know when we do not see? Stuff to the tax return. 730 days? ”. (Luca Avallone on the phone with Silvia Mazzieri).

It was only a moment.

A moment that lasts forever!”. (Silvia Mazzieri and Luca Avallone).

“It’s very simple. It happens every time there is the moon there. Disappears altogether. The pain is gone … then he appears. The problem is that he kills!”. (Luca Avallone to Silvia Mazzieri).

There are no upcoming events at this time.